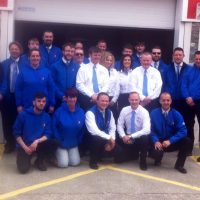 In 2010 Daryl and Declan Barry set up the Waterford Marine Search and Rescue as a registered charity. With a ‘Tin can’ boat, 2 life jackets and a jerry can of petrol, they volunteered their services to help patrol Waterford’s River Suir. Such was their commitment to help out that they soon attracted more and more volunteers to their cause.
At that time ‘suicide by drowning’ was on the rise in Waterford, and having witnessed this first hand Daryl and Declan decided to implement a Suicide Prevention Patrol. Their idea was to patrol Waterford’s quays and river with the aim of preventing any potential ‘suicides by drowning’.
Since then their numbers have grown and they now have 3 boats to patrol the river and 2 vans that act as mobile bases, patrolling Waterford’s quays. Every Saturday night and on major holidays the Waterford Marine Search and Rescue send out a crew of volunteers to keep a watchful eye on anyone who might seem to be in distress. To date they have helped in preventing over 130 ‘suicides by drowning’, and have assisted on many search and recovery operations.
During this time, since 2010, Daryl and Declan astounded many by their on-going dream of one day owning a base for Waterford Marine Search and Rescue. Their plan was to raise 10,000 euro a year for 10 years and then buy a property. However, along with their own fundraising efforts they have also received grants from the ESB, Spar, KBC Bank, and Waterford’s Mayors Ball fund. With all this and a donation from the Donal O’Connor memorial Cycle they bought unit 10 Park Road Business Park in 2016 and began work on what has been called a state of the art facility.
With the help of generous donations from local businesses the empty unit on park road was completely refurbished and, with specific necessities in mind, the majority of the work was carried out by volunteers. The highlight of the unit being a ‘family liaison room’, which Daryl and Declan had felt was an absolute necessity.
So it was that on Saturday the 26th of May, the headquarters of Waterford Marine Search and Rescue were officially opened. On the day the TF Meager pipe band began proceedings before Darren Skelton, of the Waterford News and Star, introduced the day’s guest speakers.
At 4pm Mags O’ Connor of the Donal O’Connor Memorial Cycle cut the ribbon and the new, one of a kind in Ireland, headquarters were opened.
In his speech to all assembled Local Councillor Eddie Mulligan of the Irish naval Services saluted Daryl and Declan with the words ‘Bravo Zulu’, a naval expression for a job well done. The support of the Tús Programme, its participants and Waterford Area Partnership was also acknowledged.
(For more information on W.M.S.A.R.; volunteering, training and donations, please go to WMSAR.ie)